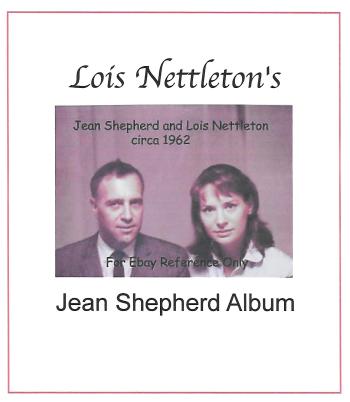 (I present here, in a series of posts, an album of images

I’ve put together and preserved in a loose leaf binder,

of many of the items Lois had saved.)

Soon after Lois Nettleton, Jean Shepherd’s third wife, died in January, 2008, Shepherd enthusiasts found that she had kept, among mementos of her professional career, many objects associated with him.

Shep had removed his early recordings of his radio shows from their mutual apartment when they separated around 1966, except for some un-noticed tapes that had been stored by Lois in a box with dolls—I got these tapes later from producer/director John Bowab, her friend and executor.

In a closet, Lois had many artifacts related to her close association and marriage to Shepherd. Some dated back to their friendship during his earliest years on the air in New York (1956-1959), preceding by several years their marriage in December, 1960. This early and later material came to light when most of her Shepherd collection was offered for sale on ebay. I bought a number of items that I could afford. Some of these I’ve posted before and I’ll post again in this new compendium. Some are from my collection and some are screen-captures from ebay of objects others bought.

Going back over my Lois’s Shep album images (my stuff and other collectors),

I see that there’s so much, I’ll have to make selections.

One ebay item that I’d actually had in my hands in her apartment when I visited her executor there, I couldn’t afford, though I still covet it mightily because of its personal connection to Lois and Shep together, and especially because of his inscription in her copy of In God We Trust: All Others Pay Cash. (I found that a Shep collector with much deeper pockets than mine had eventually bought it, and sent me a photocopy of the inscription.) Of special interest is the baffling meaning of Shepherd’s words, which seem to be a complaint against Lois. Doing a bit of research, I discovered that Shepherd probably cribbed the idea of it from a book’s inscription by P. G. Wodehouse, and/or a book dedication by Franklin P. Adams, both written decades before by two of his favorite writers.

(Many items to come in a series of posts.)